The Research Center for Cosmic Neutrinos (RCCN) was established in April 1999. The main mission of this center is to promote researches related to neutrinos based on data from various observations and experiments, and we have provided the occasion to discuss theoretical ideas and experimental results on neutrino physics. Members of this center have been involved in the Super-Kamiokande and T2K experiments, and contributing precise measurements of neutrino oscillations. Also, we have been involved in Hyper-Kamiokande project, and worked on the calculation of the atmospheric neutrino flux to have better predictions of the neutrino flux.

RCCN, together with the computer committee, oversees the operation of the central computer system in ICRR. The computer facility has high performance to analyze huge amount of data, and has been operated without any serious trouble since it was upgraded in 2014. Since 2004, RCCN has been accepted interuniversity programs related to activities in the low-background underground facility also. In FY2018, we accepted 9 programs related to these facilities.

RCCN has been organizing domestic neutrino-related workshop since it was established. On March 23, 2019, we hosted one neutrino workshop on “SuperNova Diffuse Background Neutrino”. Twenty-one physicists participated in this workshop. We have also contributed holding public lectures. Since JFY2009, ICRR and the Kavli Institute for the Physics and Mathematics of the Universe (Kavli-IPMU) have co-sponsored two public lectures each year. The public lecture held in Spring is co-organized by RCCN and the Public Relation Office of ICRR. The Spring public lecture of FY2018 was held on April 14th, 2018. Two scientists lectured on the recent progresses on the supernova neutrino and theoretical study on LHC particle phyiscs.

A photo of the domestic neutrino workshop held in ICRR on March 23th, 2019. 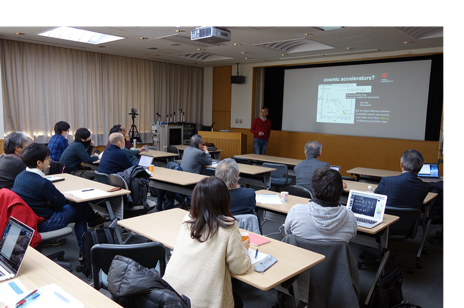