Kamioka Observatory is located in Gifu prefecture, Japan. The observatory was established in 1995 to operate Super-Kamiokande, a 50,000-ton water Cherenkov detector located 1000m underground (2700m.w.e) in the Kamioka Mine. Super-Kamiokande discovered evidence for neutrino oscillations using atmospheric neutrinos in 1998. Because of this discovery Prof. Takaaki Kajita was awarded the Nobel Prize in Physics in 2015. By comparing solar neutrino measurements at Super-Kamiokande with the results from the SNO experiment in Canada, neutrino oscillations were further established in 2001. In 2004 neutrino oscillations were confirmed using manmade neutrinos produced by a proton accelerator at KEK. The T2K experiment, which utilizes a new accelerator facility in Tokai village (J-PARC) for precision neutrino studies, started in 2009 and observed the worldʼs first indication of muon neutrinos oscillating into electron neutrinos in 2011.

Research offices, a computing facility and a dormitory for researchers are located near the observatory allowing easy access to the experimental facilities within the mine. 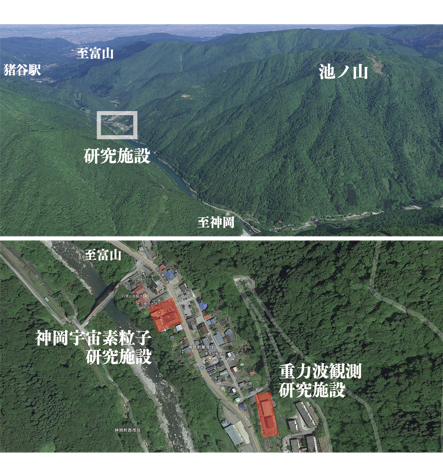