The MAGIC Telescopes captured an extreme event coming from the regions immediately surrounding a supermassive black hole located in the heart of the radio galaxy IC310. During the extraordinary outburst of gamma rays the source showed the most rapid flux variations ever seen in those types of extragalactic object at these energies. Such an extreme activity is providing insights into how a huge amount of energy can be extracted from supermassive black holes.

Over 250 millions years ago a powerful burst of very high energy gamma-ray radiation left a vicinity of a supermassive black hole in the nucleus of the galaxy named by astronomers as IC 310. In the night between November 12th and 13th, 2012 this radiation reached Earth and was observed by the pair of giant, 17m diameter MAGIC telescopes.

Scientists working in the MAGIC project were astonished seeing that the emission was changing on timescales shorter than 5 min. “Special relativity tells us that no object can suddenly light up its whole surface faster than it takes the light to cross it. As the region surrounding the black hole of IC 310 is a few times larger than our solar system, nothing was supposed to change in a shorter time than about twenty minutes.” said Julian Sitarek at IFAE in Barcelona (Spain) one of the lead scientists of this research. The puzzle is not new to astrophysicists, but in IC 310 it takes a new swing, leading to unexpected conclusions.

Supermassive black holes with masses ranging from a million up to few billions solar masses are thought to reside in the center of all galaxies. In a relatively small fraction of galaxies supermassive black holes are responsible of the unusual emission of energy observed to come from the central regions of them, leading to the so called active galactic nuclei, AGN. This activity can be spotted through the presence of jets of plasma that are supposed to be ejected from the neighborhood of the black hole, giving rise to emission of radiation through out the whole electromagnetic spectrum. IC 310 is a radio galaxy hosting in its center a supermassive black hole over 300 million times the mass of our Sun. It belongs to an extended cluster of galaxies, named Perseus cluster and is about 260 million light-years distant from Earth. Before Fermi/LAT and MAGIC discoveries of its emission in the gamma-ray domain in 2009, it was considered just as one of the thousands of galaxies forming the cluster. After these observations, IC 310 has been considered by astronomers a very interesting source and observed at all wavelengths. Special, high resolution radio observations revealed that IC 310 is a peculiar AGN, that experts call blazar, but in this particular case we do not look directly into the barrel of the jet, where the emission is normally considered to be the strongest, but at least 10 degrees off it. Since first evidence of “superluminal” motion in AGN jets in the ’70s, it is known that matter moving at almost the speed of light, produce remarkable effects (predicted by relativity) on what we observe: luminosity is enhanced and, what is of interest to our source, time variability becomes shorter. At first sight this is the solution to our problem, and indeed it is for many other blazars, but not for IC 310!

“We think that a maximally rotating black hole is accreting plasma from the central region of the galaxy IC 310. The presence around the black hole of a magnetosphere with polar vacuum gap regions allows the electric fields accelerating particles in the gaps to ultra-relativistic energies. Interactions between accelerated particles and low-energy thermal photons from the plasma accreted by the black hole leads to the observed gamma rays.”: said Dorit Eisenacher at the University of Wuerzburg (Germany) contact author of a new paper on the findings appearing on Science. “It is like lightening in a thunderstorm!” continues Karl Mannheim of the same Institute and other contact author of the Science paper, “A lightening discharging its accumulated power every few minutes on a region extended as our Solar system and launching particles at relativistic speed up to the outskirts of the galaxy. Not just an estival thunderstorm but a lighting inferno lasting since millions of years and possibly interfering with the “everyday” activity – star formation – of the whole galaxy.”

“Observe black holes at these energies enabling us to study the regions so close in that we are really looking directly at the physics of these objects disentangling different processes.” said MAGIC Spokeperson Razmik Mirzoyan of the Max Planck Institute of Physics (MPP) in Munchen (Germany) and continues: “MAGIC has been able to achieve this and other important results thanks to its good sensitivity and the low energy threshold. It is the most suitable instrument among imaging atmospheric Cherenkov telescopes to perform this kind of studies.”

MAGIC Experiment is located in the Roque de los Muchachos European North Observatory (2200m a.s.l.) on the Canary island of La Palma. The system of two MAGIC telescopes, each of 17m in diameter, is currently the worldwide largest instrument for measuring very high energy gamma rays from cosmic sources in the energy range 25 GeV-50 TeV. The neutral gamma rays penetrate Earth’s atmosphere and produce avalanches of secondary particles that emit bluish Cherenkov light. MAGIC is studying gamma rays from galactic and extragalactic sources by recording and analyzing stereoscopic pictures of these Cherenkov flashes. MAGIC has been built with the joint efforts of a largely European collaboration that includes about 160 researchers from Germany, Spain, Italy, Switzerland, Poland, Finland, Bulgaria, Croatia, India and Japan. 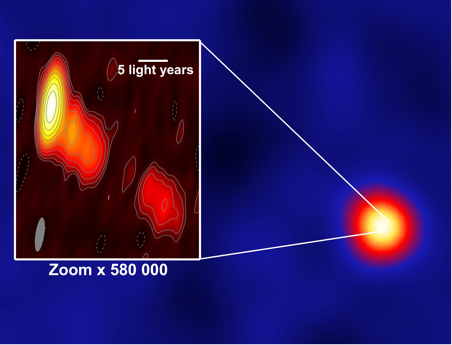 Fig 2 High-energy gamma rays flux variation of IC 310 observed with the MAGIC telescopes in the night of November 12th to 13th, 2012. The emission doubled on the timescales of 5 min, much shorter than the size of the black hole (estimated to be 20min after taking into account shorter time variabilityof the jet due to relativistic effect), indicating that the gamma ray emissions occur in much smaller regions than the black hole. (Credit: The MAGIC Collaboration) 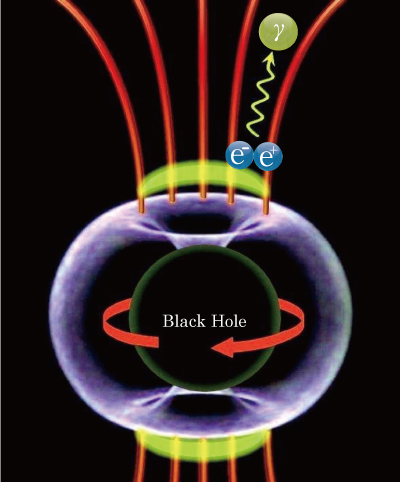 Fig 3 The observed rapid variation in gamma rays from a radio galaxy IC310 is thought to be due to the presence around the rapidly rotating supermassive black hole of a magnetosphere with polar vacuum gap regions where the electric fields accelerate electrons and positrons to ultra-relativistic energies. Gamma rays are produced when these particles interact with low-energy thermal photons from the plasma. (Credit: The MAGIC Collaboration) 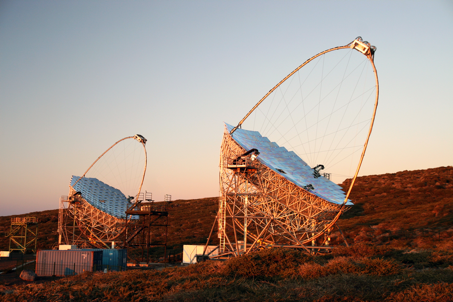 Fig 4 The system of two MAGIC telescopes, each of 17m in diameter, islocated in the Roque de los Muchachos European North Observatory (2200m a.s.l.) on the Canary island of La Palma. (Credit: The MAGIC Collaboration)