【Summary】
Neutrino oscillation is a quantum mechanical phenomenon whereby an elementary particle called neutrino can change its “flavor” (electron, muon, or tau flavor) during its flight. There are three modes to neutrino oscillation predicted by the Standard Model of particles, and while the first and the second modes have been extensively studied and determined by neutrino experiments such as Super-Kamiokande through observation of solar and atmospheric neutrinos, the third mode has yet to be established. One such method is to measure the oscillation of muon neutrinos produced in a particle accelerator into electron neutrinos.

By the data collected until April 2013, T2K (Tokai-to-Kamioka long baseline neutrino oscillation experiment) observed 28 electron neutrino candidates at the far detector Super-Kamiokande, more than would be expected (4.6 events) without the electron neutrino appearance phenomena. The probability that random fluctuations of background events alone would produce the observation is less than one in a trillion. Therefore, T2K shows definitive evidence for the appearance of electron neutrinos as a result of muon neutrino transitions into electron neutrinos in their flight.

The discovery of the electron neutrino appearance opens the possibility to explore a key to the mystery of the universe–why the universe is dominated by matter particles, not anti-matter particles. We now enter new era of precision measurement of the electron appearance probability toward the goal. The T2K experiment is expected to accumulate 10 times more data in the near future. In addition, the Hyper-Kamiokande detector holding 1 million ton water target being about 20 times larger than Super-Kamiokande is under development.

Today at the European Physical Society meeting in Stockholm, the international T2K collaboration announced definitive observation of muon neutrino to electron neutrino transformation.In 2011, the collaboration announced the first indication of this process, a new type of neutrino oscillation, then; now with 3.5 times more data this transformation is firmly established.The probability that random statistical fluctuations alone would produce the observed excess of electron neutrinos is less than one in a trillion.Equivalently the new results exclude such possibility at a 7.5 sigma level of significance.This T2K observation is the first of its kind in that an explicit appearance of a unique flavor of neutrino at a detection point is unequivocally observed from a different flavor of neutrino at its production point.
In the T2K experiment in Japan, a muon neutrino beam is produced at the Japan Proton Accelerator Research Complex, called J-PARC, located in Tokai village, Ibaraki prefecture, on the east coast of Japan.The neutrino beam is monitored by a detector complex in Tokai and aimed at the gigantic Super-Kamiokande underground detector in Kamioka, near the west coast of Japan, 295 km (185 miles) away from Tokai.An analysis of the data from the Super-Kamiokande detector associated with the neutrino beam time from J-PARC reveals that there are more electron neutrinos (a total of 28 events) than would be expected (4.6 events) without this new process.

Neutrino oscillation is a manifestation of a long range quantum mechanical interference.Observation of this new type of neutrino oscillation leads the way to new studies of charge-parity (CP) violation, which provides a distinction in physical processes involving matter and antimatter.This phenomenon has only been observed in quarks (for which Nobel prizes were awarded in 1980 and 2008).CP violation in neutrinos in the very early universe may be the reason that the observable universe today is dominated by matter and no significant antimatter, which is one of the most profound mysteries in science.Now with T2K firmly establishing this form of neutrino oscillation that is sensitive to CP violation, a search for CP violation in neutrinos becomes a major scientific quest in the coming years, and T2K will continue to play a leading role.The T2K experiment expects to collect 10 times more data in the near future, including data with antineutrino beam for studies of CP violation in neutrinos.

This discovery was made possible with the unyielding and tireless effort by the J-PARC staff members and the management to deliver high quality beam to T2K after the devastating March 2011 earthquake in eastern Japan, which caused severe damage to the accelerator complex at J-PARC, and abruptly discontinued the data-taking run of the T2K experiment. 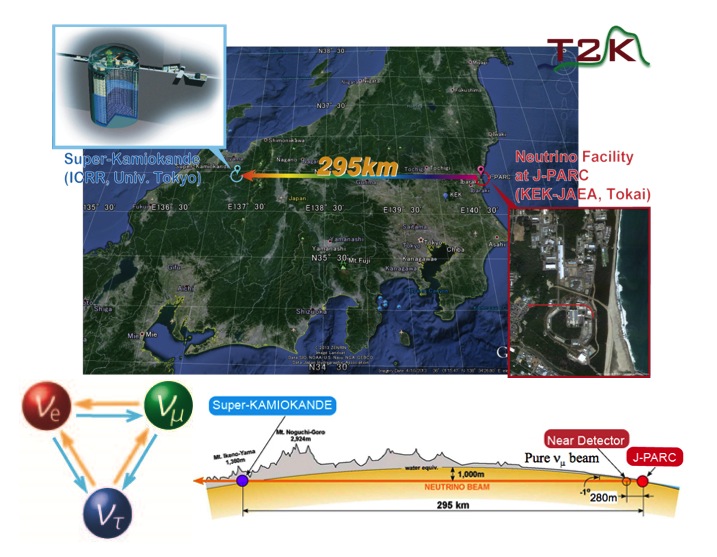 Fig.1 Overview of the T2K experiment 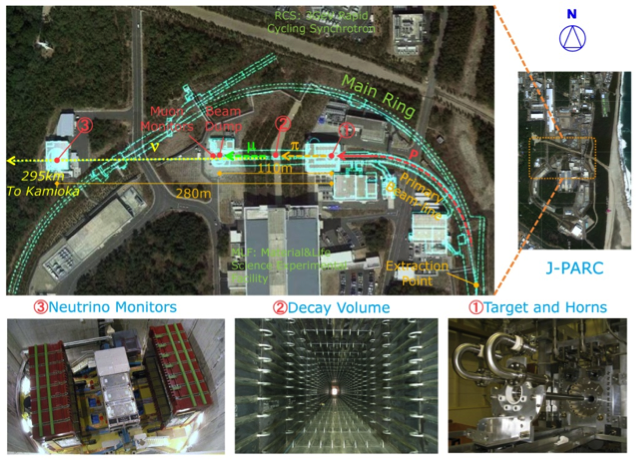 Fig.2：J-PARC Neutrino Experimental Facility
The proton beam extracted from the J-PARC Main Ring synchrotron are directed westward through the T2K primary beam line. At the target station the protons strike a ①target composed of graphite rods and produce numerous positively charged π-mesons which are in turn focused towards the forward direction under the effect magnetic horns. The π-mesons then decay into muon and muon neutrino pairs during flight in a 100-m-long tunnel, called ②the decay volume. ③Neutrino detectors located 280 m downstream of the target can monitor these muon neutrinos. A comparison of the measurements with those observed at Super-Kamiokande facilitates detailed studies of neutrino oscillation. 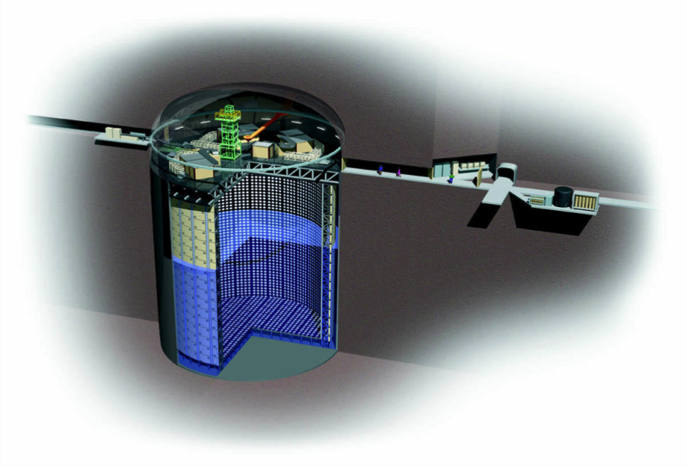 Fig.3： Super-Kamiokande Detector
The world’s largest underground neutrino detector affiliated with the Kamioka Observatory of the Institute for Cosmic Ray Research, the University of Tokyo. It is situated 1,000 m underground in the Kamioka Mine in Hida, Gifu Prefecture. Super-Kamiokande is observing neutrinos from outer space and conducting experiments and detects yet-to-be-discovered proton decays in addition to detecting neutrinos from J-PARC. This detector contains about 11,200 photomultiplier tubes, which are installed on the inside wall of a cylindrical water tank (39.3 m in diameter and 41.4 m in height) filled with 50,000 tons of water, to detect faint Cherenkov light emanating from charged particles traveling faster than the speed of light in water. 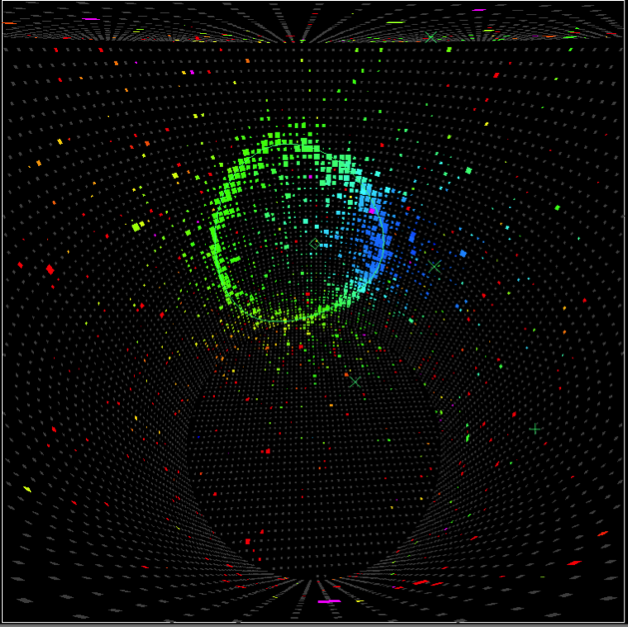 Fig.4： An Electron neutrino candidate event
In this 3D-image of cylinder-shaped Super-Kamiokande, each colored dot shows a photomultiplier tube that detected light. Electron neutrinos interact with water in the detector to produce electrons, which subsequently induce electromagnetic showers and eventually emit Cherenkov light, detected as a ring-shaped structure. This is the first candidate obtained after recovery from the 2011 great earthquake in the east coast of Japan. 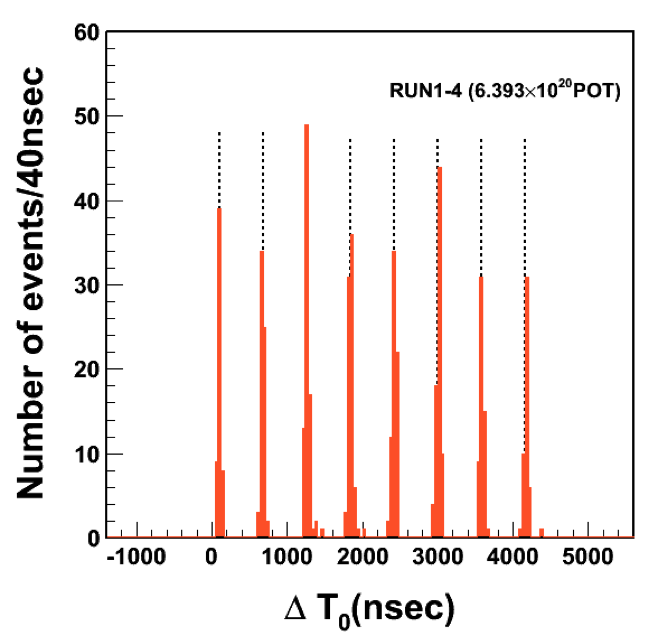 Fig.5： Distribution of the T2K event timing observed at Super-Kamioande
At J-PARC, neutrino beams are produced as pulses once in every 2.5 seconds. Each pulse has a fine-structure, with 8 “bunches”, originating from the scheme of acceleration of the proton beam.
This figure shows the timing distribution of the events observed at Super-Kamiokande, where zero in the horizontal axis stands for the time when the forefront of each beam-shot arrives at Super- Kamiokande. We can clearly observe the beam-bunch structure. 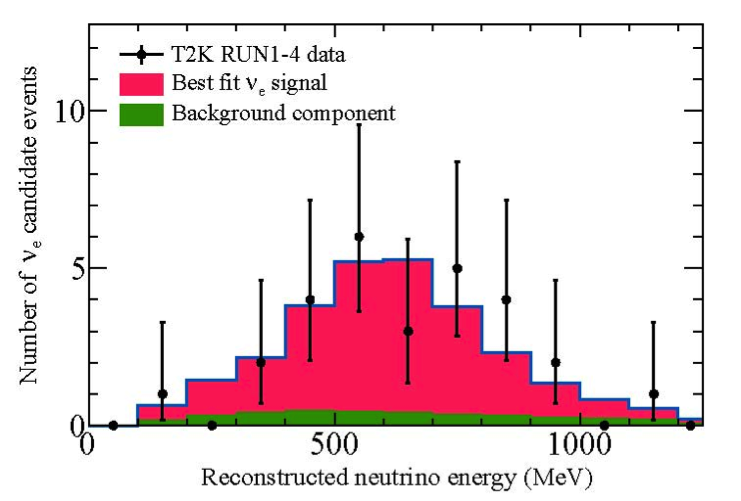 About J-PARC and KEK in general
Masanori Yamauchi
Director, The Institute of Particle and Nuclear Studies, KEK

【Glossary】
※１ T2K experiment
A long baseline neutrino oscillation experiment, where a neutrino beam produced at J-PARC is detected with Super-Kamiokande, a neutrino detector, located in Kamioka in Gifu Prefecture, 295 km away from J-PARC. T2K (Tokai to Kamioka) was named from the first letters of Tokai where J-PARC is located, and Kamioka where Super-Kamiokande is located. One of the primary purposes of the T2K experiment is to detect electron neutrino appearance, which has now, with this announcement, been realized. The T2K experiment, which has the world-leading sensitivity for neutrinos, has attracted many researchers from around the world, and in fact about 500 researchers from 11 countries: Japan, US, UK, Italy, Canada, Switzerland, Spain, Germany, France, Poland, and Russia have joined this international experiment. In Japan, 85 researchers and students from Osaka City University, Okayama University, Kyoto University, KEK, Kobe University, Tokyo Metropolitan University, University of Tokyo, Institute for Cosmic Ray Research of the University of Tokyo, Kavli IPMU of the University of Tokyo, and Miyagi University of Education participate in this experiment as core members.

※2 Neutrinos
One of the elementary particles. They are electrically neutral, and their masses are postulated to be about one millionth of quark or electron masses. Neutrinos come in three types: electron neutrinos, muon neutrinos, and tau neutrinos.

※5 leptons
A group of elementary particles including the electron and its family particles, and neutrinos that have no electric charge. As with quarks, there are six types of leptons: e (electron)- νe (electron neutrino), μ (muon)- νμ (muon neutrino), and τ (tau)- ντ (tau neutrino). These leptons are thought to correspond one-to-one with six quarks: u (up)- d (down), c (charm)- s (strange), and t (top)- b (bottom). However, detailed nature of this correspondence has yet to be elucidated. Note that leptons have their antiparticles, as quarks have antiquarks. The anti-electron is especially called a positron.