The Julius Wess Award Committee of the Karlsruhe Institute of Technology (KIT) announced to award the 2013 Julius Wess Award to Prof. Takaaki Kajita, Director of ICRR,for his “significant role in the Discovery of Atmospheric Neutrino Oscillations with the Super-KAMIOKANDE Experiment.”

The Julius Wess Award of the KIT Center Elementary Particle and Astroparticle Physics (KCETA) is awarded to an individual who have made outstanding scientific achievements in the field of astroparticle physics. Prof. Kajita will give a lecture on December 19th at KIT. 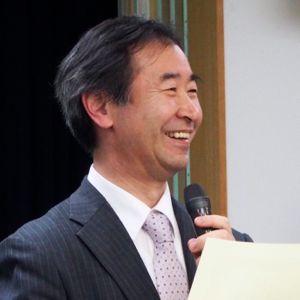 Prof. Kajita received his PhD from the University of Tokyo in 1986, and started his career at ICRR as a research assistant in 1988, since when he made significant scientific discoveries in the field of experimental particle physics including the discovery of non-zero neutrino mass by confirming atmospheric neutrino oscillation. Today as the director of ICRR, he leads the institute by promoting the field of cosmic ray research including the large-scale cryogenic gravitational wave detector, KAGRA.