Heidelberg, Germany — On 26 March 2015, the Cherenkov Telescope Array (CTA) Resource Board, composed of representatives of ministries and funding agencies, met in Heidelberg to determine with whom to begin site negotiations for the location of the telescope array in the northern hemisphere. Five candidate sites were considered: two sites in the USA (Arizona), one site in Mexico and two sites on Spain’s Canary Islands. 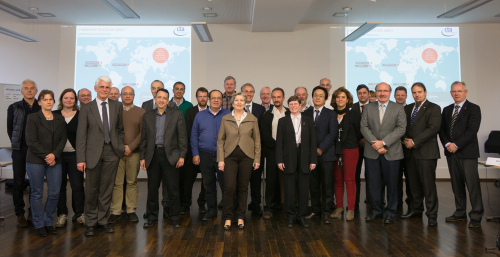 The voting members representing Argentina, Austria, Brazil, Czech Republic, France, Germany, Italy, Japan, Poland, South Africa, Spain, Switzerland and the UK have decided to begin negotiations with two countries, namely Spain (La Palma) and Mexico (San Pedro Mártir). Arizona is still kept in consideration as a possible back-up site. After negotiations, the Board will select the final site in November 2015. In regards to the southern hemisphere site, negotiations with the candidates Namibia and Chile/ESO are progressing and are expected to end in August 2015. 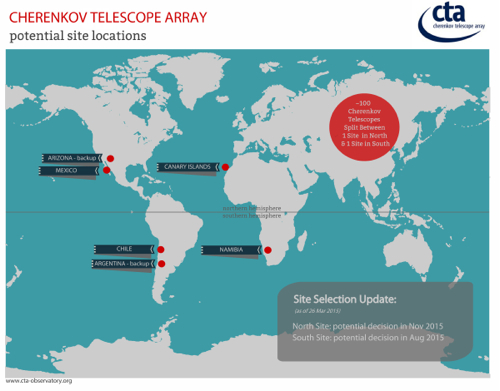 “I appreciate that we have successfully chosen the northern candidate sites with whom we would like to start negotiations as soon as possible,” said B. Vierkorn-Rudolph, chair of the CTA Resource Board. The spokesperson of the CTA Consortium, Professor Werner Hofmann added, “I’m very much looking forward to the final site decisions later this year; scientistsvworldwide are eager to see CTA advancing towards implementation.”

Currently in its pre-construction phase, determining the northern and southern hemisphere sites will be a critical step towards the realization of the Cherenkov Telescope Array. “I’m looking forward to converging on final designs for the telescope arrays now that negotiations will start with specific locations in mind,” said Christopher Townsley, CTA project manager. Following the site selection, the project will move forward with construction of the first telescopes on site planned for 2016.

CTA will consist of about 100 Cherenkov telescopes located at one site in the southern hemisphere and a smaller site in the northern hemisphere. Extensive studies of the environmental conditions, simulations of the science performance and assessments of construction costs were conducted for the potential sites.