The Large-Scale Gravitational Wave Telescope, KAGRA, in Kamioka, Japan, whose aim is to perform the world’s first direct detection of gravitational waves, will soon commence operation.

KAGRA is a next-generation telescope currently under construction in Kamioka, which is also home to Super-Kamiokande and other observational facilities well-known for their world-leading research in fundamental physics. Unlike the ordinary optical telescopes that look up the night sky at high altitudes or through space affected by less air turbulence, such as the Subaru Telescope and Hubble Space Telescope, KAGRA observes the universe from underground. The direct detection of gravitational waves, as we discuss below, requires such an unconventional method.

What Gravitational Waves Can Tell Us

Gravitational wave emission is one of the predictions made by the Einstein’s General Theory of Relativity. The indirect proof of its existence was given in 1979 when Dr. Hulse and Dr. Taylor observed the orbit of a binary pulsar, which was affected by loss of energy due to gravitational waves. However, the direct detection of gravitational waves has yet to come.

Since the dawn of human history, we have understood the world as observed using light. In the past 200 years, observations using other parts of the electromagnetic spectrum–the microwave, infrared, ultra-violet, X-ray, and gamma rays–have expanded the horizon of our knowledge of the nature, vastly enriching our life. Now with the addition of a new observational media, the gravitational wave, it is anticipated that phenomena in our universe undetectable with electromagnetic waves–such as the beginning of the universe and the birth of black holes–may become “visible”.

An artist’s impression of gravitational waves from a neutron star binary (Credit: KAGAYA)

How To Detect Gravitational Waves 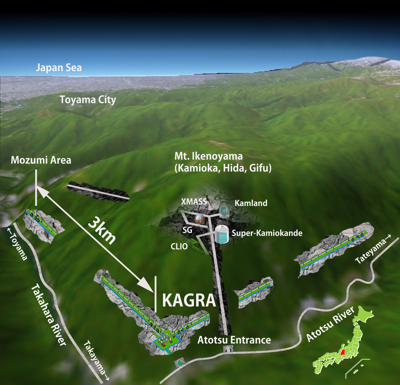 Because the expected signals from the gravitational waves are very small, researchers must eliminate all possible sources of background noise that affect the telescope. Among others, the two largest sources are seismic noise and thermal noise. The KAGRA group, which is lead by ICRR, incorporates KEK and NAOJ to maneuver its technological R&D to reduce the various noises as much as possible.

For instance, ICRR researchers chose the underground of Mt. Ikenoyama in Kamioka as the construction site for KAGRA to minimize the seismic noises, and excavated a new 7km-long tunnel 200m underground near the Kamioka mine. The seismic amplitudes in the tunnel measures a hundredth that of the ground surface, an essential requirement for stable operation of the telescope. KAGRA has two 3km arms extending at a right angle, which meant that the team had to excavate a tunnel the length of 7,700m including the access tunnel. The team completed the operation successfully in just 1 year and 10 months.

Setting the telescope underground takes out most of the seismic noise; however, there are still large enough noises that can affect essential components of the telescope such as mirrors placed at the ends of each arm reflecting laser beams back and forth. The NAOJ team contributed in developing the enhanced anti-vibration system owing to their vast experience with the previous gravitational wave detector, TAMA300, which was built at their site in Mitaka, Tokyo. The team has successfully developed equipment to protect mirrors from vibrations utilizing extremely precise pendula and springs with special materials. TAMA300 previously held the world record for detection sensitivity, and the continuous runtime of more than 1,000 hours.

Furthermore, KEK’s team contributed another aspect of the noise reduction. The mirrors, which are the heart of the telescope, have generic thermal noises due to their own temperature. Making full use of their knowledge and experience in the area of cryogenics, the team developed cryostats that cool the mirrors and keep them at -253°C.

These are examples of our collaborative efforts for enhanced sensitivity between three leading institutions of the KAGRA group; however, the gravitational wave telescope requires many other high-performing detector components to come together to operate as a full functioning telescope. Researchers from home and abroad have worked on such components as the vacuum system, the laser source, the auxiliary optics, the detector control system, the data acquisition system, and the data analysis methods.

When KAGRA Will Detect Gravitational Waves

The excavation of the KAGRA tunnel was completed in March 2014. The group then proceeded to install/develop the laser source, the vacuum pipes, the cryostats and other equipment, and completed most of the installations that are needed to commission the initial KAGRA operation.

The test run will start within 2015 JFY, after the final adjustments. The full operation of KAGRA is planed to start in 2017 JFY, when the team aims for the world’s first direct detection of gravitational waves. 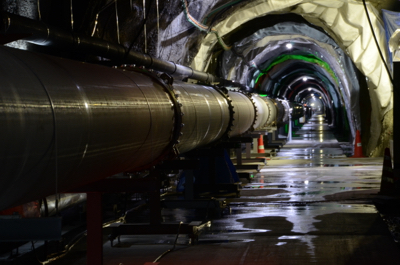