University of Tokyo Professor Takaaki Kajita, recipient of the 2015 Nobel Prize for Physics and Director of the Institute for Cosmic Ray Research (ICRR), and Kavli IPMU Project Professor Yoichiro Suzuki are among seven researchers awarded the 2016 Breakthrough Prize in Fundamental Physics.

The Breakthrough Prize, which was founded in 2012 “to recognize those individuals who have made profound contributions to human knowledge,” has been awarded to the Super-Kamiokande, Sudbury Neutrino Observatory (SNO), Daya Bay, KamLAND and K2K/T2K research teams. Professor Kajita and Professor Suzuki are affiliated with the Super-Kamiokande experimental facility, where the work that lead to Professor Kajita’s 2015 Nobel Prize was carried out.

Professor Kajita’s research showed that atmospheric neutrinos, generated when cosmic rays interact with the Earth’s atmosphere, oscillate between two of three “flavors.” This discovery, followed by the discovery that solar neutrinos generated by nuclear fusion in the Sun also oscillate, conclusively proved that neutrinos must also have mass and indicated a weakness of the Standard Model of physics. Professor Kajita shared the 2015 Nobel Prize in Physics for this research with Professor Arthur McDonald of SNO.

Neutrino research in Japan was also recognized when Emeritus Professor Masatoshi Koshiba was honored with the 2002 Nobel Prize in Physics “for pioneering contributions to astrophysics, in particular for the detection of cosmic neutrinos” at the Kamiokande experiment. 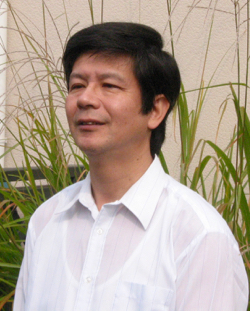