In a paper to be published in the Astrophysical Journal Letters, an international team of researchers reports the first detection of very high-energy gamma-ray emission from the distant active galaxy PKS 1441+25. The discovery was made by the MAGIC (Major Atmospheric Gamma-ray Imaging Cherenkov) twin telescopes, located in the Canary island of La Palma (Spain). MAGIC collaboration pointed the telescopes to this object following a flare seen at lower energies by Fermi satellite. The detection was afterwards confirmed by the VERITAS telescopes, located in Arizona (USA). PKS 1441+25 is one of the two most distant active galaxy detected up to such extreme energies. The very high-energy emission is attenuated on its way to Earth due to the interaction with the diffuse light filling the Universe, the extragalactic background light. This diffuse light retains the history of the stars and galaxies evolution and, hence, the story of the evolution of the Universe. PKS 1441+25 was used as a lighthouse to derive information on the evolution of the Universe from half its age up to the present day. Beside its distance, PKS 1441+25 is one of the very few Flat Spectrum Radio Quasars (a family of extremely luminous galaxies carrying hot, high-velocity gas, deep in the gravitational well of their central black hole and shooting with the speed approaching the speed of light plasma jets in our direction) detected at such extreme gamma-ray energies, allowing to study its intrinsic characteristics.

Some of the galaxies are called active, as they produce in their central parts much more light that can be explain by the stellar and dust emission. Active galaxies, hosting at their centers a supermassive black hole with a mass of million up to few billion times the mass of the Sun are amongst the most powerful objects of the Universe and dominate the gamma-ray sky: they are able to accelerate charged particles up to very high energies (VHE, E> 100 000 000 000 eV). Following a classification based on their luminosity and other astrophysical important features, PKS 1441+25 belongs to the Flat Spectrum Radio Quasars family and emits very energetic gamma rays from the vicinity of its central black hole. Flat Spectrum Radio Quasars are
enigmatic sources and scientists struggle to explain the emission of VHE gamma rays from them, observations such as those performed by MAGIC give crucial inside into those sources. Gamma rays depict the extreme Universe, but such highly energetic emission suffers absorption in the journey to the Earth due to the interaction with diffuse emission, the extragalactic background light. The extragalactic background light acts as a sort of ‘haze’ which dims the gamma-ray brightness of distant galaxies. This ‘haze’ was generated by stars and dust throughout the history
of the Universe. It traces the evolution of the Universe after the appearance of the first stars. In this context, powerful active galaxies, such as PKS 1441+25, can be used as distant lighthouses to infer the characteristics of the extragalactic background light between the Earth and the position of the active galaxy.

The emission detected from the active galaxy PKS 1441+25 has been traveling for half of the age of the Universe. PKS1441+25 and QSO B0218+357, another source recently detected by MAGIC, are the oldest VHE gamma rays ever detected from ground observatories. In the paper recently accepted for a publication in the Astrophysical Journal Letters, the current models of the extragalactic background light which constrain the evolution of the Universe from its middle age until today were tested for the first time up to energies never reached before for such distant galaxies.

The detection of gamma rays is challenging due to two main reasons. The first reason is our own atmosphere, which keeps us safe by absorbing gamma rays. To over come this problem, gammaray observations can be made by satellites outside of the Earth’s atmosphere. However, due to the low fluxes at very high energies, the detector needed would be extremely large and heavy, hence impossible to place in orbit. In such cases, we use our own atmosphere to infer the characteristics of the extreme gamma rays. When a high energetic gamma ray enters the Earth’s atmosphere, it turns into a shower of particles which travel faster than the speed of light in the air, emitting what we call Cherenkov light. This is the same bluish light that is emitted from the pools of nuclear reactors. This light is used as an indirect method to infer the characteristics of the gamma ray which arrived originally to the atmosphere. This is a relatively new technique which allowed to open a new window to the extreme Universe, and which is used by the MAGIC telescopes located in La Palma (Spain).

The second challenge comes from the intrinsic nature of the active galaxies. They are highly variable, and obviously the chances to detect them are higher during outbursts. It is not only enough to be in the right place but it also has to be the right time. In this sense, scientific collaboration in this kind of works is essential. The Large Area Telescope on board of the NASA’s Fermi Gamma-ray Space Telescope monitors the low energy gamma-ray sky every three hours, and sends alerts to the community in case an outburst occurs. On April 2015, the Large Area Telescope detected an increase of the activity of the active galaxy PKS 1441+25 and MAGIC followed up the alert, discovering VHE gamma rays from the object. The detection was also confirmed by another Cherenkov telescope system, VERITAS, located in Arizona (USA). Other groups of scientists followed up the object with different instruments to cover the electromagnetic spectrum: the Swift satellite, observing X-rays, the KVA located in Spain and the Hettstadt located in Germany, both optical telescopes, Guillermo Haro Observatory for near infrared observations located in Mexico, and METSÄHOVI radio telescope in Finland.

PKS 1441+25 is one of only a few Flat Spectrum Radio Quasars detected at VHE gamma rays. Besides the constraints on the evolution of the Universe, the study of its intrinsic characteristics is highly valuable. This object turned out to show a chameleonic behavior: during the outburst the emission characteristics resembles a different type of galaxy showing an extreme behavior. The detection of VHE gamma rays from this type of galaxies is very rare. Indeed, this new work on PKS 1441+25 agrees with previous results on the intrinsic characteristics of this emerging galaxy population. The gamma-ray emission is produced farther from the central supermassive black hole than typically expected in active galaxies.

Josefa Becerra Gonzalez, researcher at NASA Goddard Centre, says: “Flat Spectrum Radio Quasars such as PKS 1441+25 are incredibly powerful and luminous galaxies offering a unique laboratory impossible to be reproduced at Earth to explore the extreme Universe and the evolution of the Universe. The study of extreme events like the one presented in this study is only possible thanks to the very close collaboration between the Fermi-LAT satellite and the ground installations such as MAGIC.”

Miguel Nievas Rosillo, young PhD student at the Universidad Complutense in Madrid says:”The absorption of gamma-rays during their travel from distant galaxies towards us makes their study very challenging. Nevertheless with MAGIC we were able to collect high quality data from a very distant source, confirming the good performance of the instrument at low energies and how powerful the Cherenkov Imaging Technique is.”

Marina Manganaro, postdoc at the Institute of Astrophysics of Canary islands (IAC) says: “Analyzing data from such a distant galaxy was very exciting and felt like travelling back in time to learn more about our Universe’s history”.

Fabrizio Tavecchio, Professor at INAF Osservatorio Astronomico di Brera (Italy):”Understanding the features of the radiation emission from PKS 1441+25 was not an easy task, but thanks to this detection we now know a bit more about the mechanism behind gamma-ray production in distant galaxies”.

Elina Lindfors, PI of the observation project in MAGIC, researcher at Turku University says: “In MAGIC we have always followed closely the behavior of sources in other wavelengths and when they show increased flux in some region of the electromagnetic spectrum, we readily follow them with MAGIC. Discovery of VHE gamma-rays from PKS 1441+25 was yet another success of this observational strategy.”

Abelardo Moralejo, researcher at IFAE Barcelona (Spain): “It is the first time that precise measurements of the very-high energy emission from such a distant galaxy have been obtained. These observations have allowed us to verify, for the first time at such a large scale, that the absorption of very high energy photons in the intergalactic medium is consistent with what we know of their fundamental interactions, and with the current estimates of the density of diffuse light in the Universe.”

Razmik Mirzoyan, spokeperson of the MAGIC Collaboration, says: “Hunting very far sources allows gamma-ray astrophysicists finding the limits of the observational universe and probing the low-energy photon fields in space- an important input for cosmology. The universe is only partially transparent for very high-energy gamma rays, measured by MAGIC. While traveling towards the Earth, these can interact with the low energy photons emitted by the galaxies and stars over the evolution of our universe, and vanish by converting into e-e+ pairs. Since 2007, when MAGIC first time broke the record of the farthest source detected in VHE gamma rays (3C279 at the redshift of 0.536), we were hunting for much further sources. Finally we succeeded to “catch” a strong flare of the radio galaxy PKS 1441+25 residing in the further half of the universe (redshift = 0.934), practically doubling the reach of the observational universe.”

The first sign that this active galaxy was “waking up” in the gamma-ray band came in January, when the all-sky monitoring of the Fermi Gamma-ray Space Telescope’s Large Area Telescope showed PKS 1441+25 at its brightest level ever, about 70 times brighter than its average over the first four years of the Fermi satellite mission. Roopesh Ojha, at NASA’s Goddard Space Flight Center noted, “Sometimes these active galaxies remain quiet for years and then suddenly flare up, for reasons we do not fully understand.” In April, Luigi Pacciani (affiliation to be included), using the public Fermi data, discovered another flare from PKS 1441+25, and this time it showed activity at the highest-energy part of Fermi’s energy range. Pacciani commented, “Seeing these very energetic gamma rays with Fermi, as well as seeing this object flare at optical and X-ray energies, made it clear that it had become a good target for MAGIC.” 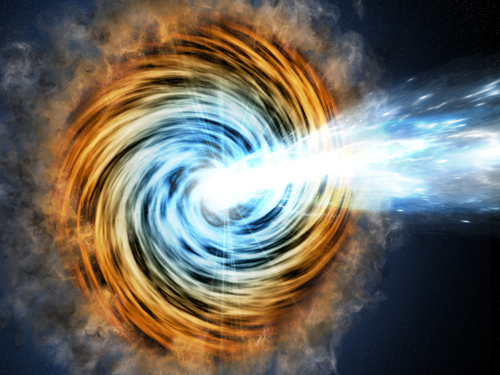 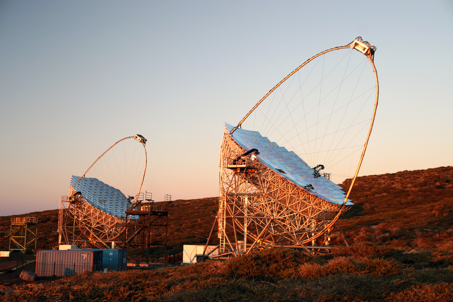 The MAGIC (Major Atmospheric Gamma-ray Imaging Cherenkov) experiment is located at the Roque de los Muchachos European North Observatory, at 2200 meters above sea level on the Canary island of La Palma. The system of two MAGIC telescopes, each of 17 meters in diameter, is currently measuring very high-energy gamma rays from cosmic sources in the energy range between 25 GeV and 50 TeV. The neutral gamma rays penetrate into Earth’s atmosphere and produce avalanches of secondary particles that emit Cherenkov light. MAGIC is studying gamma rays from galactic and extragalactic sources by recording and analyzing stereoscopic pictures of these Cherenkov flashes. MAGIC has been built with the joint efforts of a largely European collaboration that includes about 160 researchers from Germany, Spain, Italy, Switzerland, Poland, Finland, Bulgaria, Croatia, India and Japan.

For more information on MAGIC, visit: https://wwwmagic.mpp.mpg.de/
The Fermi Gamma-ray Space Telescope is an international satellite circling Earth every 96 minutes. Its Large Area Telescope (LAT) has a huge field of view, allowing it to image the whole sky every two orbits, or about 3 hours. The Fermi LAT studies high-energy gamma rays, the most energetic form of light, using Einstein’s famous E=mc2 to convert the gamma-ray energies into particles. The gamma-ray energies range from about 20 million electron volts to over 300 giga electron volts. For comparison, the light we see with our eyes has energy about 2 to 3 electron volts. The data from Fermi are immediately made public, so that anyone can see what is happening in the gamma-ray sky.

NASA’s Fermi Gamma-ray Space Telescope is an astrophysics and particle physics partnership, developed in collaboration with the U.S. Department of Energy and with important contributions from academic institutions and partners in France, Germany, Italy, Japan, Sweden and the United States.