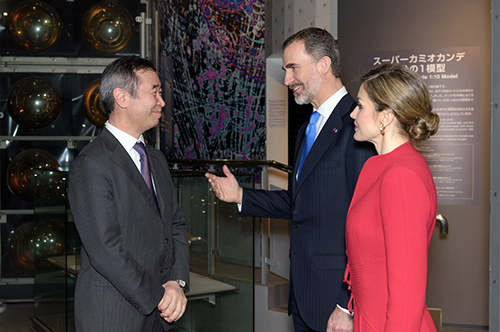 Director Takaaki Kajita and Professor Masahiro Teshima have welcomed His Majesty the King Felipe VI of the Kingdom of Spain and Her Majesty the Queen Letizia of the Kingdom of Spain on a state visit to Japan, at Miraikan, in Tokyo on 5th of APR.
They respectively have introduced Super-Kamiokande project and CTA (Cherenkov Telescope Array) project which is the international-collaborative project and which Spain is the one of the main participants of.

Their Majesties have seen the Super-Kamiokande exhibit on the 5th floor. Director Kajita has explained about “Neutrino Oscillation”, which is the phenomenon that neutrinos spontaneously change their type in flight.
Subsequently, the four Spain-Japan science collaborative programs have been introduced to Their Majeties. From ICRR, Prof. Teshima has given the presentation about CTA project with Director Rafael Rebolo from Instituto de Astrofisica de Canarias (IAC). 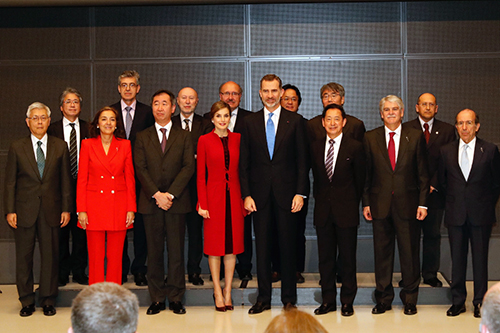 For the movie of the state visit to Miraikan, check out below.
[ Sus Majestades los Reyes durante la visita al Museo Miraikan ] (Youtube)