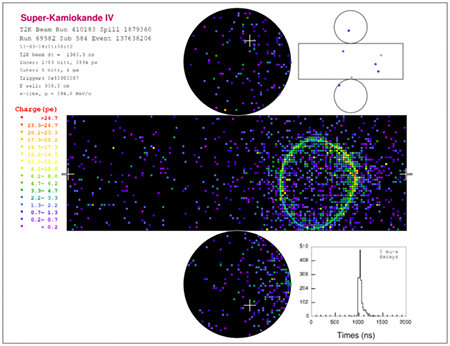 The detected pattern of an electron neutrino candidate event observed by Super-Kamiokande.

Results on “Neutrino CP Violation” announced during a press release last summer [Link] by the T2K experiment have been selected as an “Editors’ Suggestion” appearing in the April 10th, 2017 issue of Physical Review Letters.

The T2K experiment creates neutrinos at the Japan Proton Accelerator Complex in Tokai-Mura and observes them using the Super-Kamiokande detector in Hida City. Through detailed investigations of the interconversions among their types, the experiment studies the properties of neutrinos. At the start of the experiment T2K created muon neutrinos and studied their conversion into electron neutrinos, but since 2014 the experiment has been using a muon antineutrino beam to investigate conversion into electron antineutrinos. The results indicate that it is likely that the appearance of electron neutrinos and electron antineutrinos do not occur at the same rate, hinting that CP symmetry may be broken by neutrinos. This result was initially announced at a press release in August of last year, but has now been published in Physical Review Letters and has additionally been selected as an “Editors’ Suggestion.”

In contrast to predictions from the theory of the Big Bang, the present universe is filled with ordinary matter and almost no antimatter. Neutrinos may play an important role in resolving this mystery; the key comes in differences in the properties of neutrinos and antineutrinos, or in other words, CP violation. In order to precisely determine those differences large numbers of neutrinos are needed and it is therefore essential to continue measurements at T2K. However, in order to more efficiently observe these neutrinos a detector much larger than Super-Kamiokande is necessary. For this reason, plans are now underway for the Hyper-Kamiokande detector, which will be 20 times larger. Currently Japan and 14 other countries are advancing preparations for this detector, aiming for operations to start in 2026.

The T2K experiment is hosted by The University of Tokyo Institute for Cosmic Ray Research and the High Energy Accelerator Research Organization and is composed of 450 researchers from 63 institutes in across 11 countries.