The international T2K Collaboration strengthened its previous hint that the symmetry between matter and antimatter may be violated for neutrino oscillation.A preliminary analysis of T2K’s latest data rejects the hypothesis that neutrinos and antineutrinos oscillate with the same probability at 95% confidence (2σ) level. With nearly twice the neutrino data in 2017 compared to their 2016 results, T2K has performed a new analysis of neutrino and antineutrino data using a new event reconstruction algorithm for interactions in the far detector, Super-Kamiokande. Today’s announcement was made by Prof Mark Hartz, of the University of Tokyo Kavli Institute for the Physics and Mathematics of the Universe (Japan) and TRIUMF (Canada), who presented the results at a colloquium at the High Energy Accelerator Research Organization (KEK) in Tsukuba, Japan.(https://kds.kek.jp/indico/event/25337/) 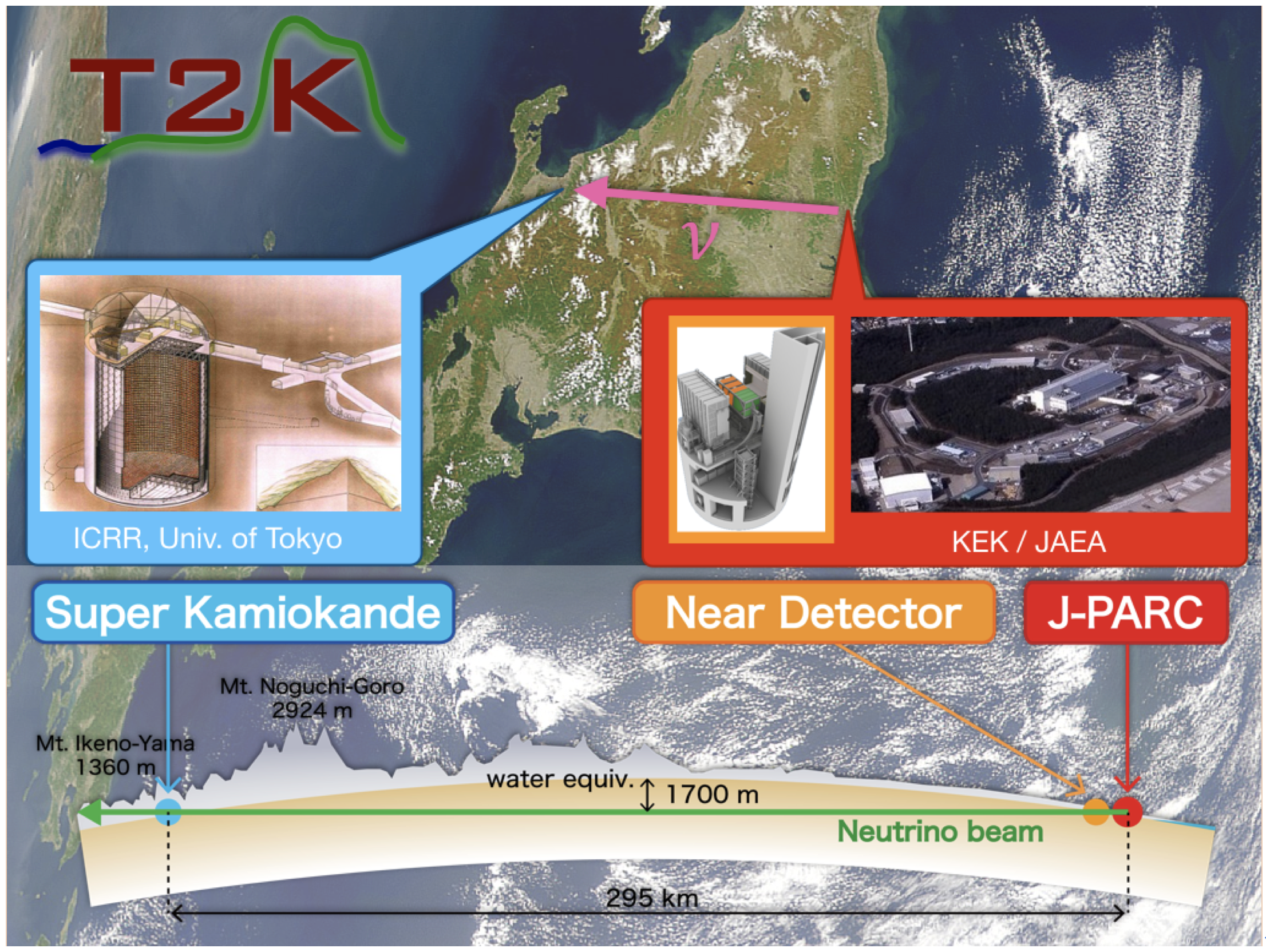 (Fig.1) Overview of the T2K experiment

Why the universe is primarily comprised of matter today, instead of being comprised of equal parts matter and antimatter, is one of the most intriguing questions in all of science. One of the conditions required for the observed dominance of matter over antimatter to develop is the violation of Charge-Parity (CP) symmetry, which is the principle that the laws of physics should be the same if viewed upside-down in a mirror (Parity), with all matter exchanged with antimatter (Charge).If CP violationoccurs in neutrinos, it will manifest itself as a difference in the oscillation probabilities of neutrinos and antineutrinos.

Whether the probability for electron neutrino appearance exceeds, or not, the electron antineutrino appearance probability depends on the value of the CP violating phase, δCP, introduced by Kobayashi and Maskawa. The CP violating phase can take any value from -180 to +180, and if it deviates from 0 and ±180 then CP violation occurs. It has been measured to be around 68 for quarks; T2K’s goal is to measure the neutrino CP phase for the first time.

In the T2K experiment in Japan, a muon neutrino beam is produced at the Japan Proton Accelerator Research Complex (J-PARC) located in Tokai village, Ibaraki prefecture, on the east coast of Japan. The neutrino beam is created by directing 30 GeV protons from the J-PARC Main Ring (MR) accelerator onto a cylindrical target to produce an intense secondary particle beam that is focused and filtered by strong magnetic lenses called neutrino horns. The focused particle beam decays into a beam of muon neutrinos or antineutrinos, depending on the filtering done by the neutrino horns. The neutrino/antineutrino beam is monitored by a detector complex in Tokai, 280 m away from the neutrino target, and is aimed at the gigantic Super-Kamiokande underground detector in Kamioka, near the west coast of Japan, 295 kilometers (185 miles) away from Tokai. During their journey, a small fraction of these muon neutrinos will turn into electron neutrinos.

T2K’s observed electron neutrino appearance rate is significantly higher than would be expected if CP symmetry were conserved. In contrast, the antineutrino data set, while still too small to make strong statements, shows a smaller electron antineutrino appearance rate than would be expected if CP symmetry were conserved. T2K observes 89 electron neutrinos while approximately 67 neutrinos are expected with no CP violation, and they observe 7 electron antineutrinos when approximately 9 are expected.When analyzed in a full framework of three neutrino and antineutrino flavors, and combined with measurements of electron antineutrino disappearance from reactor experiments, the T2K data exclude CP conservation at the 95% confidence (2σ) level. The 95% CL allowed region for the CP violating phase, δCP, is [-167; -34] ([-88; -68]) for the normal (inverted) hierarchy, with the best fit point being -105 (-79).The size of the expected T2K allowed region for this data set, using the constraint from the reactor experiments, is a 95% CL region spanning approximately
[-200; +12] ([-156; -22]) for the normal (inverted) hierarchy, assuming a case of maximal CP violation.

The T2K experiment is primarily supported by the Japanese Ministry for Culture, Sports, Science, and Technology (MEXT), and is jointly hosted by the High Energy Accelerator Research Organization (KEK) and the University of Tokyo’s Institute for Cosmic Ray Research (ICRR). The T2K experiment was constructed and is operated by an international collaboration, which currently consists of nearly 500 scientists from 63 institutions in 11 countries [Canada, France, Germany, Italy, Japan, Poland, Russia, Spain, Switzerland, UK, and USA].This observation is made possible by the efforts of J-PARC to deliver high-quality beam to T2K.

This 2017 result is based on a total data set of 2.25×1021 protons on target (POT), which is 28% of the POT exposure that T2K is set to receive. If there were no neutrino-antineutrino asymmetry, the chance of observing an asymmetry as large as what T2K observed, due to random statistical fluctuations, is about 1 in 20.To explore and solidify this intriguing hint the T2K collaboration need more neutrino and antineutrino data.The full T2K exposure of 7.8×1021 POT is expected to come by ~2021, thanks to planned upgrades to the J-PARC MR accelerator and the neutrino beamline. Moreover, T2K has proposed a run extension that will lead to a full exposure of 20×1021 POT, with 3σ sensitivity to CP violation observation (for certain values of oscillation parameters, including the current best-fit point) by ~2026, when the next generation experiments are expected to begin operations.An upgrade of the T2K near detector for the run extension is currently being designed, with a planned installation date of 2021. The T2K run extension has been given stage-1 status by the J-PARC Centre Directorate.

The search for CP symmetry violation with neutrinos and antineutrinos builds on T2K’s 2013 discovery of electron neutrino appearance in a muon neutrino beam, which was the first statistically significant observation of the appearance of a neutrino flavour. This appearance is an example of neutrino oscillation, a purely quantum mechanical long-range interference phenomenon; neutrino oscillation proves conclusively that neutrinos have non-zero mass.T2K’s 2013 electron neutrino appearance discovery resulted in a share of the 2016 Breakthrough Prize for Fundamental Physics being awarded to Koichiro Nishikawa and the entire T2K collaboration.

More details on the new T2K result, as well as prospects for future running of the experiment, can be found in the presentation file from the KEK seminar (https://kds.kek.jp/indico/event/25337/)), and more information about the T2K experiment can be found on the T2K public website ( http://t2k-experiment.org ). 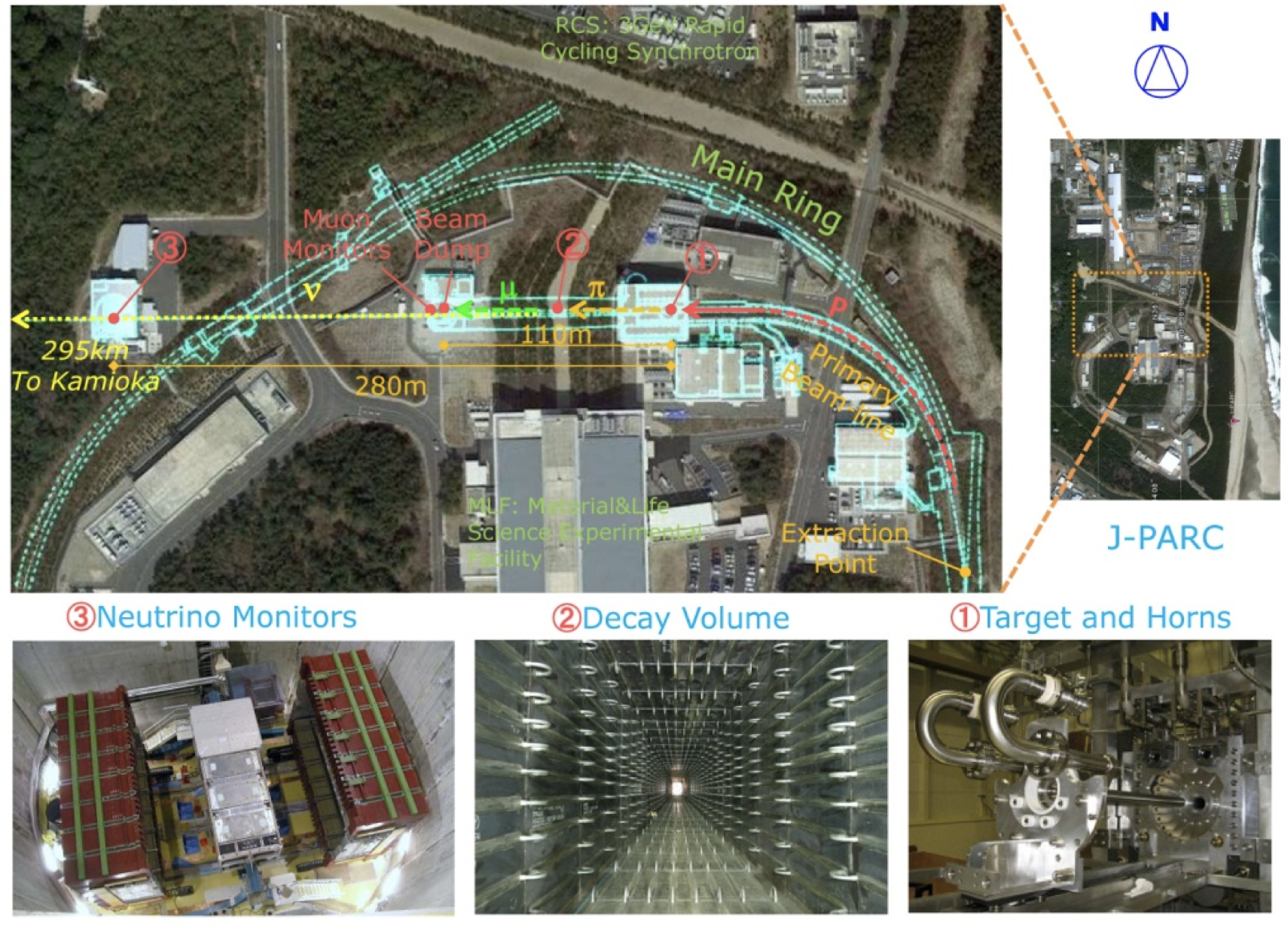 The proton beam extracted from the J-PARC Main Ring synchrotron are directed westward through the T2K primary beam line. At the target station the protons strike a 1) target composed of graphite rods and produce numerous positively charged π-mesons which are in turn focused towards the forward direction under the effect magnetic horns. The π-mesons then decay into muon and muon neutrino pairs during flight in a 100-m-long tunnel, called 2) the decay volume. 3) Neutrino detectors located 280 m downstream of the target can monitor these muon neutrinos. A comparison of the measurements with those observed at Super-Kamiokande facilitates detailed studies of neutrino oscillation. 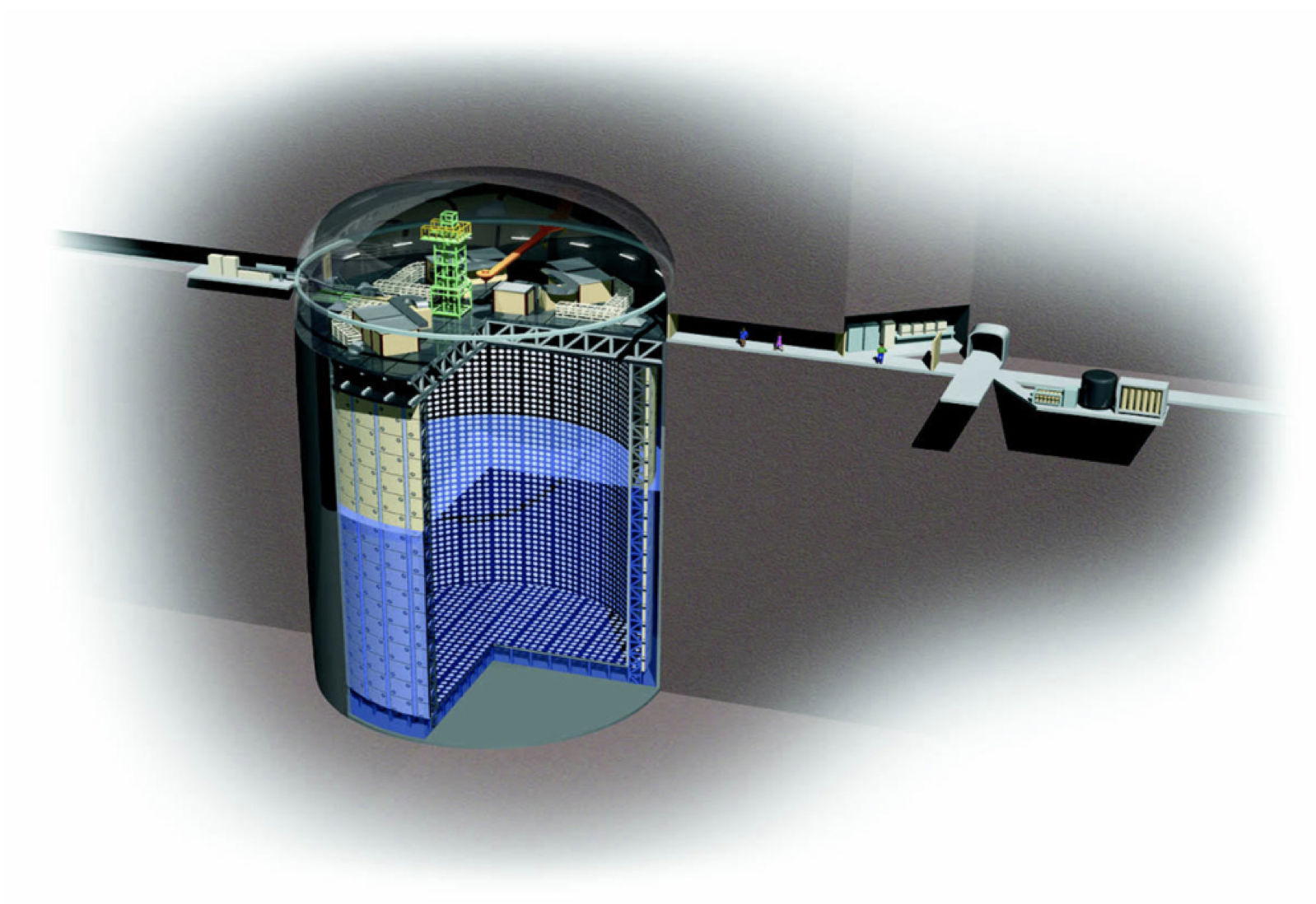 The world’s largest underground neutrino detector affiliated with the Kamioka Observatory of the Institute for Cosmic Ray Research, the University of Tokyo. It is situated 1,000 m underground in the Kamioka Mine in Hida, Gifu Prefecture. Super-Kamiokande is observing neutrinos from outer space and conducting experiments to detect yet-to-be-discovered proton decays, in addition to detecting neutrinos from J-PARC. This detector contains about 11,200 photomultiplier tubes, which are installed on the inside wall of a cylindrical water tank (39.3 m in diameter and 41.4 m in height) filled with 50,000 tons of water, to detect faint Cherenkov light emanating from charged particles traveling faster than the speed of light in water. 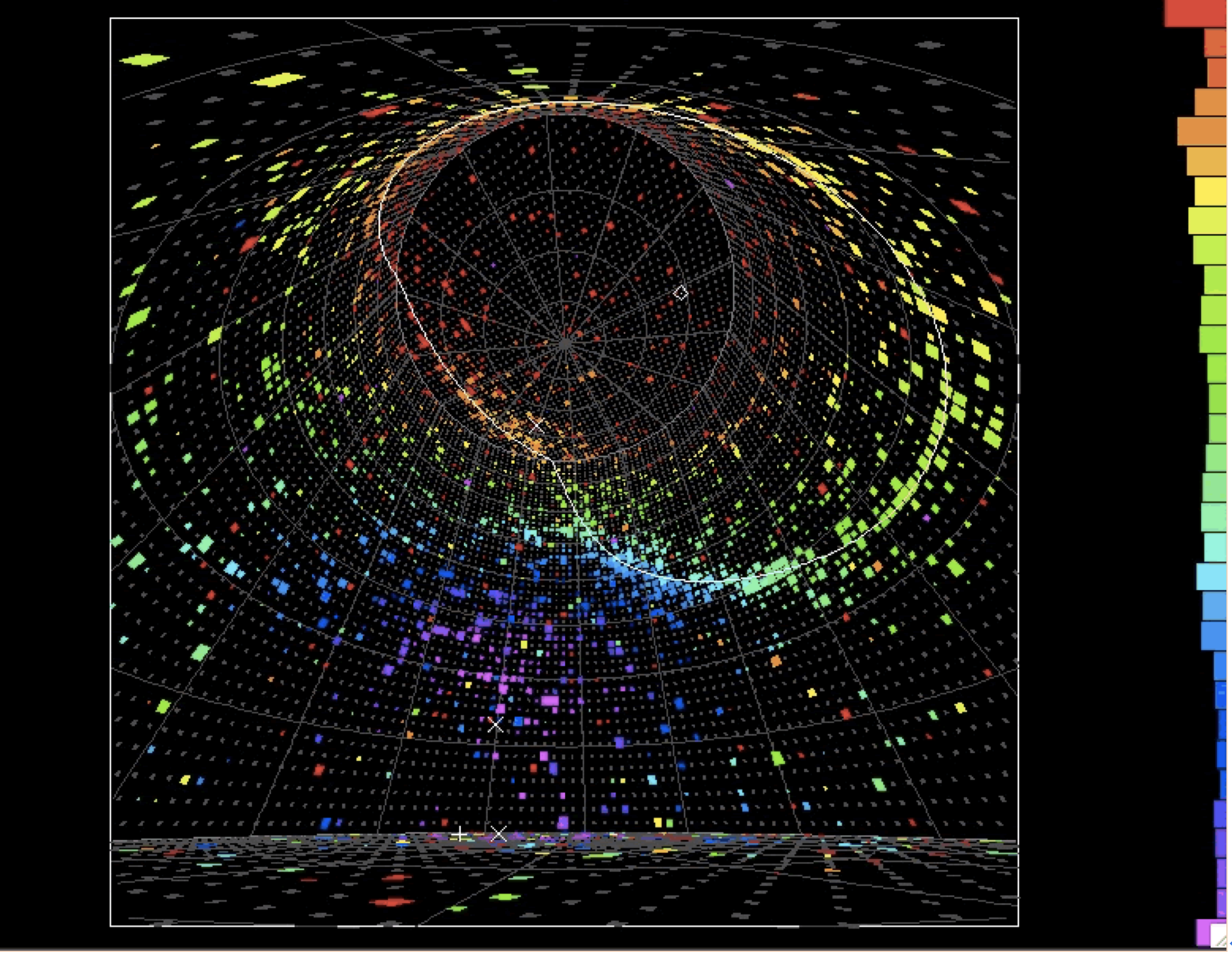 (Fig.4) An electron-neutrino candidate in Super-Kamiokande